With the maturity of the key technologies of solar refrigeration and air-conditioning, rapid development has been made especially in solar collectors and refrigerators, and solar air-conditioning has also developed rapidly. In the 1990s, vacuum tube collectors and lithium bromide absorption refrigerators entered the market in large numbers. The hot water temperature of the vacuum tube collector is above 85°C in summer, which can fully meet the needs of solar air conditioning. 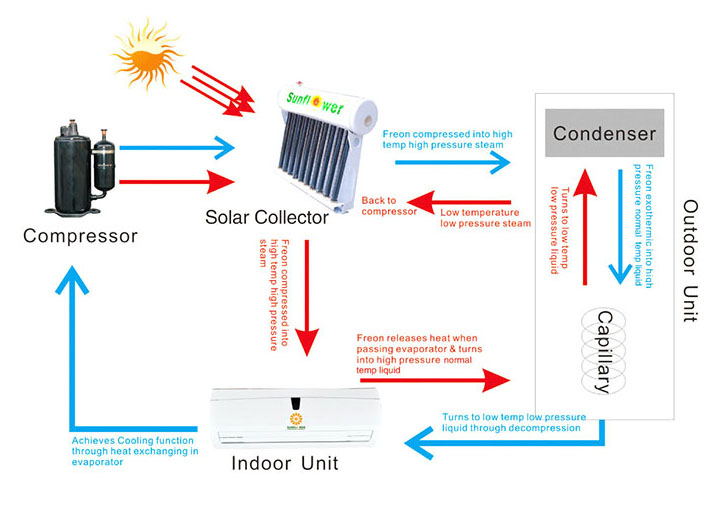 At present, there are two main ways to realize solar air conditioners. One is to realize light-electric conversion first, and then use electricity to drive a conventional compression refrigerator for cooling; this realization method is simple in principle and easy to implement, but high in cost. The second is to use the heat of the sun to drive cooling. This cooling method has high technical requirements, but has low cost, no noise and no pollution. This method is mainly used now. What are the hot spots of this air conditioner?

(2). Health and environmental protection: The traditional compression chiller uses freon as the medium, which has a great destructive effect on the atmosphere. Solar air conditioners use non-toxic and harmless water or lithium bromide as a medium, which is very beneficial to the environment.

(3). High efficiency: The solar air-conditioning system can combine cooling in summer, heating in winter and hot water supply in other seasons, significantly improving the utilization and economy of solar energy systems.

Solar air conditioning systems take into account both heating and cooling applications. Comprehensive office buildings, guest houses, schools, hospitals, swimming pools, aquaculture, homes, etc. are ideal applications. In winter and throughout the year, heating is needed, such as domestic hot water, heating, swimming pool water heating and temperature adjustment, etc. In summer, it needs to cool the world, and solar hot water cooling is a central air conditioner. Currently, countries all over the world are stepping up research on solar air conditioning technology. According to the survey, countries and regions that have or are building solar air-conditioning systems include Italy, Spain, Germany, the United States, Japan, South Korea, Singapore, and Hong Kong. This is because the energy consumption of air-conditioning in developed countries accounts for a considerable proportion of the annual civil energy consumption, and the use of solar energy to drive the air-conditioning system is of great significance for saving conventional energy and protecting the natural environment.