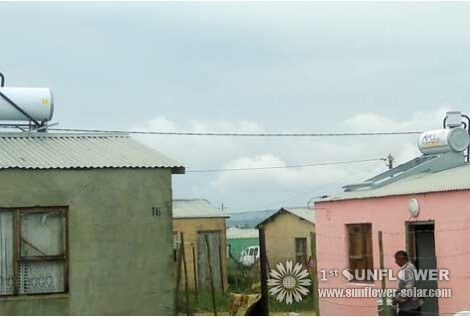 Grahamstown has in-stalled 300 solar water heaters in new low-cost houses to help lessen the demand on the national energy grid.

In the initiative, the Eastern Cape Development Corporation (ECDC) has financed a Grahamstown energy business with more than R1m to install the solar water heaters.

Eskom's programme has set a target of 3000 solar water heaters for Grahamstown's low-cost housing units, with a countrywide goal of 1 million units by the end of 2014, set in line with the minister of energy's target, Eskom says.

ECDC account manager Wayne Mahoney, says solar water heaters are not only a new business opportunity for the Eastern Cape, but will also help save on electricity bills.

Anthony Witbooi, a father of three who lives in Extension 9, the low-cost housing area that benefited from the project, says the solar water heaters brought convenience for his family.

"We did not have a geyser before. With solar water heaters now installed, we'll save time as we used the kettle to heat water before," said Witbooi, a resident for 10 years.

Buyile Siyongwana, who co-founded Lumizone with Lunga Qeqe, said the company was contracted by Eskom to oversee the installation of 100 solar water heaters each month, reaching 500 units by the end of June.

Siyongwana and Qeqe are part of a new crop of entrepreneurs heeding the global call to conserve energy in order to reduce greenhouse gas emissions in the face of climate change. – 701151