For many people, the idea of using the sun's energy to heat water in the home amounts to a green luxury - one whose upfront costs are beyond their means.

Buying and installing a solar thermal water heating system averages between $7,000 and $10,000, which is far more than the cost of a conventional water heater.

But the state's major utilities are working on bringing down the cost of this reliable, renewable and pollution-free technology.

Through the just-launched California Solar Initiative: Thermal Program, any homeowner who supplements a water heater fueled by gas or electricity with one powered by the sun could receive a cash rebate of up to $1,875. And the rebate is double for low-income households.

"We all have to go more green or stay green as in my case," says Nancy Aubry, a retiree who installed a solar water heater in her Torrance home last year to replace a 30-year-old system damaged in a windstorm. "With the utilities companies offering rebates and the government helping (with 30 percent federal tax credits through 2016), well, why not go for it now? Because down the road it may be a requirement you have to pay for out of your own pocket."

Rebates are based on how much energy is displaced by the system. Typically it amounts to $1,500 for gas and $1,010 for electricity with rebates declining through 2017 (or until funding runs out) as more systems are installed.

The statewide goal is to save 585 million thermal units of natural gas by the end of the program and 275.7 million kilowatt hours of electricity every year, as well as expand the market to bring about innovation and reduce greenhouse gas emissions.

"We want to encourage other technology and not just our own gas-related technology because it's the right thing to do," says Gwen Marelli, director of commercial and industrial services at SoCalGas.

"It's good for everyone."

Granted, there are several types of solar water heating systems, but closed-loop systems with flat-plate solar collectors are most commonly used in California.

The collectors are typically installed on rooftops. They contain tubing covered by a black panel under a plate of glass inside an aluminum frame.

In a closed-loop system, a heat transfer liquid with a higher boiling point and lower freezing point than 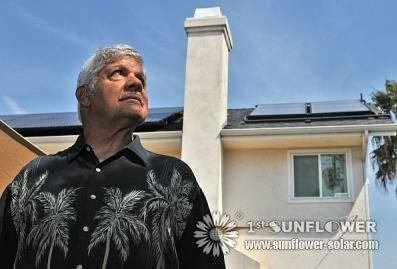 water circulates through the collector tubing to protect the system from damage. The heat transfer liquid gets heated by the sun and is pumped down through pipes into a tubing coil in the solar water heater tank. It heats the tubing coil, which in turn heats the cold tap water in the storage tank.

That means she's using less energy to heat water in the conventional tank, since it is already delivered hot from the solar water heater tank.

On rainy days when the solar collectors absorb less heat, her conventional water heater kicks in.

"You're still using electricity and gas elsewhere but what's nice about the solar water heater is you never have to worry about running out of hot water," says Aubry, who shares her home with her husband, Ed, and their son, Edris.

Although she put in the solar thermal heating system last year, Aubry still qualifies for the cash rebate, as would any homeowner whose system was installed by an eligible contractor or self-installer who completed the CSI-Thermal Program training workshop after July 15, 2009.

The equipment, likewise, must be certified by the SRCC (Solar Rating and Certification Corporation) and IAPMO (International Association of Plumbing and Mechanical Officials) to qualify for the financial incentive.