Why you should turn to solar energy-solar water heater 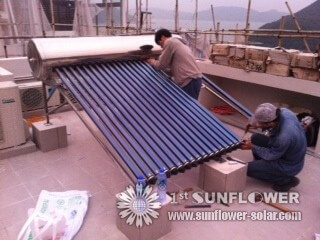 The solar water heater industry seems set to take off in the Western Cape when new legislation takes effect next month.

At least half of hot water in new buildings must be produced by energy-efficient from 1 April, after a change of the national building regulations and building standards Act.
Denis Barker, Managing Director of Solaheat, expected that have drastic effects on the solar business.
"Our business is currently 80 percent of retrofitting of existing homes and only 20 percent for new developments." We expect that ratio to change 50-50 without decrease in the contracts for the retrofit ", he said."
"The Government wants renewable energy to replace current up to 10 000 gigawatt hours up to 2013." The Department of energy estimates that 23 percent of this goal could be covered by the solar water heating. "
Barker has also seen new support from insurance companies, which he said were ", the installation of new solar geysers cover, instead of only the replacement of old electric geysers, if they fail."
Eskom has a rebate program for people who install solar water heaters and SolarTech Chief Executive James McCallum said he was happy about this and the new building code.
"Most people want to trust energy independence, they not fully that systems are available and want to be able to work if the network goes down", he said.
McCallum said from next month someone would have to build a House, to plans that took into account present the new rules.
The Government had also "Efforts and resources" in the installation put low pressure solar water geysers in the townships and remote areas. Panels could now Darling, see Khayelitsha, Mfuleni and many other areas.
The sector is in the large number of companies that have made the market an example.
Barker said: "about three years ago, there were only about 80 companies (in the country), installed the solar panels for hot water heating, and the total is currently around 300".
Just his SA has moved to Cape Town head office solar power plant specialists of juwi renewable energies.
Juwi has built more than 1,500 solar power plants around the world with a total capacity of about 950 megawatts.
The change of the building regulations entered into force on 10 November last year, but the developers exceptions could alleviate apply the pressure on those, the existing plans and drafts had. On April 1, the duration of the exemption will be over.
Solar hot water systems cost 000 and R24 between R16 000, while traditional geysers cost between R6 000 and R9 000.
Monthly savings vary by solar water heating, but be expected can be more than R150. Eskom believes that customers who will benefit from its discount pay for their equipment with power savings over five years.
How to get a discount:
With Shaun smilie
SA eligible homeowners that are to replace electric water heating with solar systems for discounts from Eskom.
Power demand in their means keep SA SA energy company offers a discount of R3 280 up to R8 964. The discount depends on mostly by the "Kilowatt-hours to expect electricity to save on a typical day is".
James McCallum, CEO of SolarTech, said his company has millions Eskom rebates with approximately R21 and "typical household systems rule discounts received from approximately R5 500" treated.
Six months after installation, to consumers in their rebate form to send, see Eskom Web page and within eight weeks from the discount will be deposited in your bank account.
The discount system is valid since 2008 and is supposed to last until 2013. Eskom warns that every year the amount of each discount will drop "on the basis of market influences".
The discount that system SABS-test not must, have been respected to qualify SA national standard, a supplier with the sustainable energy society of SA water heater Division entered are installed, need a timer in order to optimize energy savings and regulate everyday, if it an electrical back-up. There must be at least a five year warranty. -Cape Argus

Why you should turn to solar energy-solar water heater